Recently the AFN fluctuation has received the media and peoples’ attention, requesting an explanation from Da Afghanistan Bank. Although it is perceived as a negative outlook, currency fluctuations are simply a very common occurrence among economies. They happen for a variety of reasons but in our case the depreciation of our currency is mainly caused by deteriorating economic and political situation in Afghanistan.

Let me explain the rate of exchange and how it impacts the economy. Rate of exchange is the value of one country’s currency against another country’s currency. In simple words, it is the buy and sell of a domestic currency with a foreign currency and in fact one of the key determinants of a nations sound economy. Therefore, fluctuations in any currency impacts country’s balance of trade. A higher-valued currency can make the imports cheaper while making its exports expensive at foreign markets and it can have the exact opposite effect for a lower-valued currency.

Please note that Afghanistan has never maintained a fixed exchange rate regime.  This means that DAB permits AFN to fluctuate based on demand and supply of domestic and foreign currencies in Exchange Markets. This is very important to note that rise and fall of currencies are due to several determinants, specifically trade relations among countries. Other factors include inflation, interest rate differences, current account deficit, public debt and economic performance.  Let us examine some international cases.

A recent example of a major depreciation is the case of Turkish lira in 2018, when it dropped by 20 percent. There are various reasons for such a sharp depreciation. The first reason being investors fear of Turkish companies’ inability to pay loans in dollar and Euro as the lira kept hitting low. Second reason was President Trump’s approval of doubled tariffs imposed on Turkey’s aluminums and steel industry.  Central Bank of the country also prevented an increase in interest rates while not having enough foreign reserves to compete in foreign exchange market. The lira kept depreciating to 26% by 2020 and lost its value more than 50% from 2017.  Further extreme examples are depreciation of Iranian Rial and Uzbekistan Som over the past few years.

Therefore, Afghani is not alone to have had a depreciating trend over the years.  As stated, currencies fluctuate based on domestic and international economic changes.  A six-year trend (shown in the graphs below) show the currencies of the neighboring countries have also depreciated. In another example, the Pakistani Rupees value was at 85 in 2010, devalued to 102 in 2015 and eventually dropping to 161 in 2020 against US dollars. 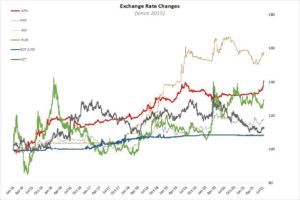 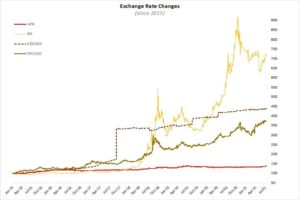 Now let’s analyze the situation of the Afghani in particular. The depreciation in AFN in contrast with other regional currencies have only been four percent during the past years, this is almost negligible considering the aforementioned realities in our horizon.  Particularly last 30 days, AFN experienced an accelerated downward trend causing concern among Afghans. While understanding their legitimate concerns, we would also highlight latest security and political developments as the primary cause of contribution. At the same time, inflation has been kept within single digits.  We should bear in mind that DAB’s core mandate is to keep price stability through developing monetary policies that best contribute to financial stability.

Role of the central banks pertaining to rate of exchange?

Central banks are the main financial authority in most countries. Their role is keeping financial stability by preventing inflation and regulating monetary policy. Central bank decisions on monetary policy are influential in determining exchange rate. The central bank manages the internal economic variables such as exchange rate by altering money supply, interest rates, and by intervening in foreign exchange markets. It will use its domestic and foreign reserves to buy and sell foreign currencies within the foreign exchange market.

DAB does not target exchange rate in the market. However, considering its significant impact on other macroeconomic indicators, it closely monitors exchange rate behavior to smoothen large fluctuations. AFN exchange rate experienced minor fluctuation against major currencies. Since the beginning of 2021, AFN has depreciated by 0.71 percent averaging 77.33 and as of end of May stood at 77.66 per USD.

We at the central bank have three tools to implement Monetary Policy Objectives. These tools are used to mop up excess liquidity to keep inflation within pre-defined targets. The constituents are CN Auction, Open Market Operations and Wadiha Auction.

Besides worsening security situation, Covid-19 has been another factor to slow down overall economy including trade, private sector, manufacturing and services sector.  The third wave took a huge toll on many Afghans both physically and emotionally.

In fact, our international partners in the recent meetings, appreciated our stance on major macroeconomic variables including Exchange Rate. IMF’s recent review of Extended Credit Facility (ECF) program for Afghanistan was considered successful, making the next disbursement available. The full press release can be read here: IMF Executive Board Completes First Review of the Extended Credit Facility Arrangement for the Islamic Republic of Afghanistan

So what is next for us? While risks in Afghanistan have increased, DAB has sufficient reserves and capabilities to maintain macroeconomic stability in the country. In addition, this quarter DAB made significant achievements in several other areas such as the development of our national payments system. In sum, inflation remains low, macroeconomic situation is stable, and DAB stands ready to support economic growth.

Ajmal Ahmady is the Governor of Da Afghanistan Bank, who previously served as the Minister of Industry and Commerce and Economic Advisor to the President of Afghanistan. He also worked at various asset management firms and the World Bank for almost a decade. He has two masters from Harvard (MBA and MPA/ID). Mr. Ahmady is previously published in Harvard Business School, The Hill, The Financial Times and Bakhtar News Agency.