Wednesday, May 14, 2014
Kabul (BNA) The Electoral Complaints Commission (ECC) intends to submit its findings on the electoral frauds to the election commission of Afghanistan within one day.
According to ECC spokesman, the ECC is continuing assessment to finalize its decision on the cases of frauds and riggings. It is mentionable to say that the ECC was expected to report the IEC about the outcomes of the assessments it carried out on the electoral complains on 8th May. However, four days later, the announcement of final results from the April 5 election remains delayed as the public awaits action from the ECC.
The IEC cannot announce the final results of the presidential election until the conclusion of this year’s lengthy fraud assessment process. ECC officials have said the review process has been completed, yet the delivery of its findings remains stalled. Based on the election procedures, the ECC had to submit its findings on complains until 8 May.
But the ECC failed to submit the findings on the due date because of the delay which was made by the election commission of Afghanistan on the preliminary result announcement. “We are trying to complete our job today so that we are able to send our final decision to the election commission, there has not been any sort of deficiency from our side,” ECC spokesman Nadir Mohseni said.
Meanwhile, the Independent Election Commission (IEC) has said that it awaits the final decision of the electoral complaints commission and IEC hopes that the findings are shared with the people soon. “We are determined to announce the final results of elections on 14 May, we hope to soon get the final decision of electoral complaints commission and share it with people through media,” IEC spokesman Noor Mohammad Noor said.  Meanwhile the delay has also followed major criticisms of the general public.
Former chief of the IEC, Azizullah Ludin, warned that further delay would only become a bigger issue, and he urged election officials to communicate more openly about the delays.
“If these commissions were aware that they couldn’t complete their job in time, then they should have told the people, “Ludin said.
The delay and deviation from the election timeline has garnered frustration among many Afghans.
Many have said the uncertainty surrounding the election has caused problems for Afghan business. “We want the electoral bodies to complete their work, because people are anxious and concerned,” a resident of Kabul named Maryam told.
“Business activities have been undermined… what are they doing? … Let the people avoid these problems.”
They year’s presidential election marks a historic event for Afghanistan, its first democratic transition of power in modern history.
It also comes at a critical juncture for the country, with NATO troops withdrawing by the end of the year.
“I am a tailor, and our business is not doing well because all await the results of the elections,” another resident named Najibullah said.
Successful holding of presidential and provincial councils elections are considered major achievements for the future stability of the country and for institutionalizing democracy in the war-affected country.
The elections were held in a peaceful environment and followed major appreciations inside and outside the country.
The Afghan National Security Forces (ANSF) provided satisfactory security coverage to the people of Afghanistan so that they commute to the polling station without fear and threats and use their right to vote.
April 5 historic election saw unexpectedly high turnout, defying fears of militant violence and speculations that suspicion of fraud would keep voters from showing up in large numbers for the country’s first democratic transition of power in modern history.
Although Election Day reportedly saw less ballot box stuffing and voter fraud than was the case in 2009, accusation of improprieties biasing certain candidates have increased in the days since holding 2014 elections are interpreted a great achievement for the Afghan people and the government. Because the Taliban on the order of their foreign masterminds had joined other terrorist organizations to sabotage the election process. There are a lot of apprehensions and fears among the people that the country will face major attacks.
Because the Taliban and terriers had warned conduct suicide attacks and explosions on the Election Day to sabotage the historic elections.
The election had only one loser which was the Taliban. The people have suffered major problems while casting their votes. In the previous elections, the Taliban cut off the fingers of many voters.
But this never undermined the determination and sprit of Afghan people to use their democratic right. Even those national of the country whose fingers were cut by Taliban again came out and casted their votes to accomplish their national obligation.
Now the presidential candidates are passing through a great examination of their time.
The candidates by realizing the ongoing sensitive political scenario of the country must struggle to play their role in the election in a democratic process and must avoid blame games posing on each other have to avoid any kind of speculations on a possible political deadlock, because the nation accomplished their task effectively like a civilized and patriotic nation. Now the candidates should the same track and contribute in strengthening the democratic process in the country. 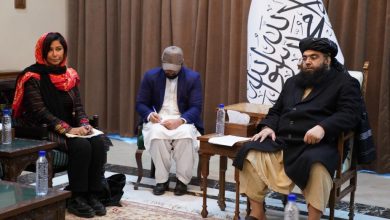