KABUL (BNA)The Ministry of Agriculture, Irrigation and Livestock today, with the slogan “Seedlings of Independence and Greenery”, started the national field of national planting in 1401.

According to BNA reporter, The occasion was held on the on Tepea Nader Khan, Officials from the Islamic Emirate of Afghanistan attended.

At the start of the event, Mawlawi Abdul Rahman Rashed give speech about the importance of planting from the perspective of Islam, saying: “A city without green space is not beautiful.”

He recited one of the hadiths of the Holy Prophet (PBUH) in which it is stated: It counts. ”

Mawlawi Abdul Rahman Rashed called on the citizens of the country to participate in the nationwide planting work to reduce air pollution and the beauty of the country.

Acting Minister of Agriculture added that the Ministry of Agriculture, Irrigation and Livestock has trained more than 6 million fruitful and non-fruitful seedlings in the provinces, including the center in the provinces, and another 19 million seedlings have been produced in cooperation with institutions, farmers’ associations and the private sector. It is ready for planting in 1401.

He called on the people to go to the offices of the partner institutions in the center and provinces of the country and get seedlings. 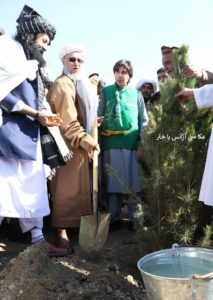 Meanwhile, Mawlawi Abdul Salam Hanafi, Deputy Prime Minister, spoke about the importance of saplings and planting, and called on the people to plant at least one sapling for cleanliness, beauty, greenery and reducing air pollution in the country and for the protection of Environment

The aim of this compign is to encourage people to contribute to greenery and improve the environment, reduce air pollution and increase beauty, improve water resources, create employment opportunities and promote the culture of planting in the country.

Recently, the authorities officially started the spring planting year 1401 by planting seedlings in the national field.

4 School Students Injured in an Explosion In Kunar

A child saved from Grip kidnappers in Nangarhar

Our Aid Over the Past 20 Years Led to Corruption in Afghanistan: UK Aid Watchdog