Sunday February 14, 2021
Kabul (BNA) Dozens of oil and gas tankers carrying millions of dollars’ worth of fuel caught fire on Saturday, creating an inferno at Afghanistan’s biggest trade crossing with Iran.
The blaze broke out in the early afternoon at Islam-Qala customs, some 120 kilometers from the city of Herat, engulfing the tankers that were parked nearby after crossing the border.
Head of the Herat Chamber of Commerce and Industries, said the blaze had caused millions of dollars in damage.
“Preliminary investigations show that more than $50 million of damage has been caused by the fire so far,” he said.
At least 17 people have been taken to hospital, some of them with serious burns, said Ibrahim Mohammadi, head of the Herat ambulance service.
Jailani Farhad, the spokesman for the governor of western Herat province, said hundreds of tankers were ablaze.
“We don’t have the required facilities to contain it, so through the foreign ministry, we have asked the government of Iran to help us contain the fire,” he said.
The cause of the fire was unknown, he added.
M.A.Ansari

2,000 Houses to be Built for Southeast Quake Victims

Two Killed in a Personnel Conflict in Laghman 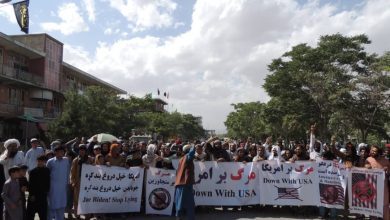 Biden Claims On Killing al-Zawahiri in Kabul is Lie