Kabul (BNA) A delegation of Islamic Emirate led by acting foreign minister Amir Khan Muttaqi lift Kabul to “Oslo” capital of Norway.
According to BNA, Norwegian capital will host a meeting tomorrow, at Oslo capital of Norway, where delegation of Islamic Emirate Muttaqi will talk with a number representatives from many countries.
Deputy Spokesperson of Islamic Emirate of Afghanistan says the delegation will have discussion with representative of U.S, European Union and some other Afghan political figures.
At the same time delegation of the foreign ministry of Norway says a special meeting will host on Sunday in Kabul where the Islamic Emirate will only not meet the Norway representative but as well meet his allies and other women’s rights activist and journalists.
Norway seeks dialogue with the Islamic Emirate with the aim of improving the human rights situation and women’s participation in society, as well as strengthening humanitarian efforts to support the people of Afghanistan, the Norwegian Foreign Ministry said in a statement.
In another expansion, the Ministry of Foreign Affairs of the Islamic Emirate has announced that the European Union has officially opened its embassy with the aim of a permanent presence in Kabul.
Abdul Qahar Balkhi spokesperson of Ministry of foreign affairs said on a Twitt, the EU embassy reopened after a series of meetings and dialogues with EU representatives.
Balkhi twitting, that in addition to the previous aid of 220 million Euros, the union has also announced another 268 million Euros of humanitarian aid, a part of which has been allocated for the payment of teachers’ salaries.
The European Union has also confirmed that a number of staff from the EU Delegation for Humanitarian Aid will be in Kabul.
From the political point of view, the Oslo summit and the opening of the EU political mission in Kabul show the confidence of foreign countries in improving the situation in Afghanistan and that the Islamic Emirate can lead the country in a positive direction.
Prior to this, Amir Khan Muttaqi, the acting Foreign Minister of Affairs IEA, had visited Iran and met with a number of Afghan political figures in Iran, and as well had constructive talks with Iranian officials on boosting cooperation between the two neighboring countries.
From the political point of view figures, the visit of the Acting Foreign Minister to Iran and his participation in the Oslo Summit in Norway and the reopening of the EU Delegation in Kabul all indicate that the Islamic Emirate is proving to be a political and leading reality in Afghanistan. Has an active view on regional and trans-regional cooperation and convergence.
Recent changes in the political and diplomatic relation shows that the Islamic Emirate has a positive approach in its interaction with the countries of the world, and its presence in the Afghan political ground is being accepted by the international community.
The political figures believe that Afghanistan’s active and constructive diplomacy has convinced the world to understand the realities in this country and to shorten the way for the world to interact with the Islamic Emirate.
The Islamic Emirate of Afghanistan has a extensive revelation in governance and emphasizes that the way to achieve prosperity is national unity and solidarity and at the same time considers regional cooperation and convergence as the only solution to the problems with regional the countries. 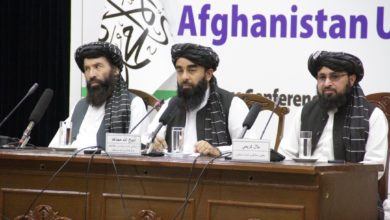