Wednesday, June 04, 2014
Kabul (BNA) Sayed Mosadiq Khalili, Deputy Minister of Information and Culture, who had attended international seminar on cultural heritage in France delivered speech on the importance of the cultural heritage in Afghanistan and the need for their preservation the other day. According to BNA, he also met with Jing Fang the chairman of international cultural heritage in Asia Pacific and called for the protection of Jam minaret. In the meeting, Khalili stressed that the retaining wall of the Jam minaret had been destroyed due to harsh floods hit the area recently putting the minaret at risk of collapse; while the calligraphy and decorations of the Jam minaret have also been damaged by rains. In addition to presenting pictures of the minaret, Musadiq Khalili sought the support of international cultural heritage of Asia Pacific to cooperate with the ministry for information and culture in preserving the Jam historical site. Promising cooperation, Jing Fang said he would contact Japan, Korea and Italy to contribute for the preservation of Jam minaret. The official also promised to send two experts in near future to Afghanistan to help the ministry for information and culture in preparing in registering world cultural heritage by providing training to the employees of the ministry. 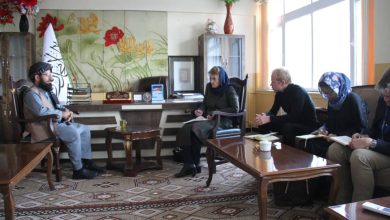