Wednesday, June 11, 2014
Kabul (BNA) Hamid Karzai, President of the Islamic Republic of Afghanistan met with Russian Special Envoy to Afghanistan Zamir Kabulov on Tuesday.
According to presidential press office to BNA, in the meeting held yesterday at presidential palace, both sides’ discussed and exchanged views related to bilateral relations and cooperation between the two countries and Afghanistan’s election runoff.
In the meeting, President Karzai stressed that Afghanistan’s new president would continue his friendly relations with Russia as relations with Russia were key for Afghanistan.
In return, the Russian Special Envoy to Afghanistan Zamir Kabulov said Russia and Afghanistan had common interests and were geographically close to each other, adding deepening and extension of relations between the two countries were important for Russia. 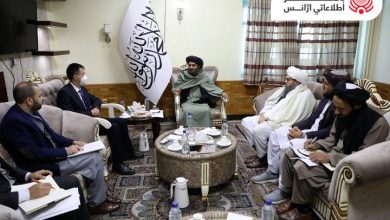