Kabul (BNA) President Karzari in his meeting with the members of the high peace council discussed future actions of the council in the light of the loya jirga resolutions.
At this meeting which was attended by Prof. Sebghatullah Mujaddidi, Pir Sayed Ahmad Gailani, Marshal Mohammad Qaseem Fahim and Mohammad Karim Khalili vice-presidents, the members of the council advanced their proposals on carrying and strengthening of the peace process in the light of Loya Jirgah advices.
Also, at this meeting more effectiveness of the peace process, creation of changes in the composition of the council, expansion of council activities in provinces, the need for honest cooperation of Pakistan in preparing the ground for peace talks, creation of a specific address for opposition, more activation of influential, elders and religious scholars in the peace process and attraction of oppositions for talks were discussed.
They said that despite the martyrdom of Ustad Rabbani that was a great blow to the peace process, the majority of people of Afghanistan are supporting peace and the international community also supports this process and meanwhile all Taliban are also not opposing peace, for this very reason, the peace process should move ahead and in order to accelerate this process the peace talks should be carried through a specific address with the opposition elements.
They argued that the peace process should be carried through the Afghans and the foreign countries should create facilities for talks.
The president said at this meeting that during the past years led by martyred Ustad Rabbani and Prof. Sebghatullah Mujadidi efforts were made for peace restoration to create a reliable and specific address by the government of Afghanistan and that in the past year the peace council also got credibility inside and outside the country.
At the meeting president Karzai reiterated that the peace process by following the advice of the Loya Jirgah be continued and a national influential should lead this process.
It was decided at the meeting that after the Bonn Conference a meeting be held between the president and members of the high peace council and a decision be taken on appointment of new chairman and its future actions. 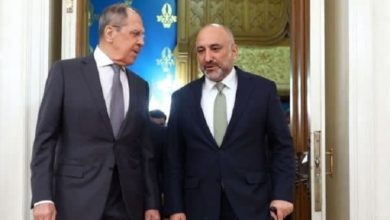