President Ghani, VP Saleh and VP Danesh also signed a book on the dam in commemoration of the event before releasing a white dove signifying the country’s desperate wish for peace.

The President of the Islamic Republic of Afghanistan, Mohammad Ashraf Ghani, traveled to Zaranj, the capital of Nimroz province, this morning to inaugurate the Kamal Khan Dam.

The president also visited the Baluch agricultural fair and cultural event held on the occasion of the inauguration of the Kamal Khan Dam, and congratulated everyone on National Water Management Day. Then, President Ghani laid a wreath at the foot of the memorial minaret of those martyred while protecting the Kamal Khan Dam and prayed for the souls of the martyrs.

The President also planted a sapling next to Kamal Khan Dam in the hope of a prosperous Afghanistan and prayed for the comfort and well-being of the people.

The president also inaugurated a postage stamp named after Shaheed Mohammad Musa Shafiq and praised his services in the field of water management in the country. 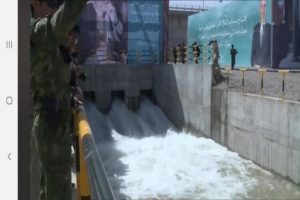 Addressing an event on the occasion, President Ghani said that Taliban has deprived Afghans of dozens of Kamal Khan Dams. “Today, those who are fighting, should think about Kamal Khan Dam for a few minutes,” the President said.

President Ghani went on saying that he will no longer consider Nimruz as “deprived” province and in a message to the Taliban, he said he was not building the dam for himself but for their children.

Afghanistan still stands by its word to provide water to Iran, President Ghani said but stated that this would be as per the water treaty between the two countries and not more than what is agreed upon. “If Iran wants more water, they should pay something,” President Ghani said.

President Ghani also stated that Afghanistan is currently looking into ways to produce wind and solar generated electricity and foreign companies are assisting in these sectors.

On the Kamal Khan Dam initiation, the president said one water channel that will be used for irrigation purposes will be completed this year. Others will also be established, he said.

The president said that from today, the control of water in the province is now in the hands of Afghans.

President Ghani also said that economy of Iran and Afghanistan are interrelated and cooperation between two countries should develop. He added that the value of transferring goods through Chabahar Port is 2.5 times less than Karachi Port. 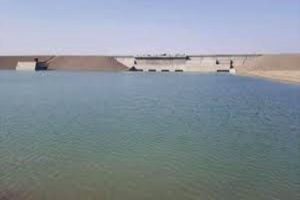 The dam in Chahar Burjak district of the province has a 52 million cubic meters capacity and will irrigate 174,000 hectares of land.

The dam is located 95 kilometers from the city of Zaranj, capital of the province. The dam built along the Helmand River will irrigate 174,000 hectares of land in three districts and will also supply water to the provincial center.

It is expected to provide nine megawatts of power, and, in the first stage, it will store 52 million cubic meters of water, according to the National Water Affairs Regulation Authority. The dam is 16 meters high and is intended to irrigate agricultural lands while also preventing flooding in the province.