Thursday, August 5, 2021
Kabul (BNA) President Mohammad Ashraf Ghani traveled to Tehran capital of Iran this morning.
According to BNA, the presidential office said in a newsletter that the purpose of Mohammad Ashraf Ghani’s visit to Tehran was to attend the inauguration of Sayed Ibrahim Raisi, the president-elect of Iran.
During the visit, President Mohammad Ashraf Ghani will be accompanied by Sarwar Danesh, Second Vice President, Mohammad Hanif Atmar, Minister of Foreign Affairs, and Abdul Matin Beg, General Director of the Office of the President.
During this visit, Mohammad Ashraf Ghani, in addition to meeting with Dr. Sayed Ibrahim Raisi, President-elect of the Islamic Republic of Iran, talking with him about further expansion of relations and cooperation between the two countries, at the inauguration ceremony of the new President of Iran, held at the Islamic Consultative Assembly.
.S. Y 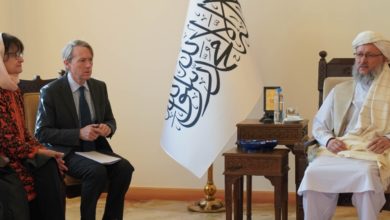