Saturday, April 25, 2015
Kabul (BNA) The former president Hamid Karzai who is visiting Germany in separate interviews with German television ZDF and newspaper Suabich Zeitong termed terrorism as major threat to Afghanistan, BNA reported.
However, Karzai said that the situation in Afghanistan is much better than the past.
About Daesh activities in Afghanistan, the former president said that Daesh has no place in Afghanistan.  He also called on Taliban to join the peace process and begin talks with Afghanistan government.
Describing Germany as a good friend of Afghanistan thanked it for its cooperation over the past decade.
Karzai also described the role of China and West for stabilizing peace in Afghanistan.
During the visit, Karzai also met a number of Afghan students studying in Bokhom University of Germany. 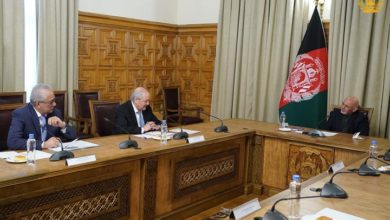