Kabul (BNA) Addressing the Avant Grade Film Festival inauguration, the first festival of Afghan experimental films, nominee and acting Minister of Information and Culture, Mohammad Qasim Wafayezada said that cinematographers portray moments of joy and sorrow of the people of the country.

The event, which was attended by a number of officials from the Ministry of Information and Culture, cultural institutions and cinema artists and was held at the Afghan Film Hall, the Acting Minister of Information and Culture praised the work of the country’s cinematographers and the Afghan Film Directorate in organizing the Avant Garde Festival, Afghanistan’s first experimental film festival, saying this was the first step in making experimental films in the country.

“In societies like Afghanistan, despite the tendencies, the multiplicity of cultural diversity in the provinces and in different parts of the country, there are different environmental experiences that we can become aware of by making experimental films,” he said.

Wafayezada also thanked the cinematographers for their responsibility and good feelings towards the people, and said: “We will stay in our homeland, give hands and do effective work for Afghanistan.” 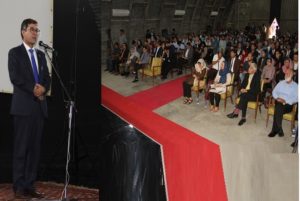 Later, the message of the country’s First Lady was read out by her office representative, in which the organizers of the festival were praised. The message read that holding such programs reflected the cultural achievements of the country’s artists.

The First Lady’s message also emphasized that the country’s filmmakers should focus more on films that create a sense of patriotism among the people and reflect the original culture of the country.

Likewise, Sahra Karimi, the director of the Afghan Film, provided information about the festival and said that 34 films have been shown in the festival, including short experimental films, animation and video clips.

She said that in the current situation, holding film festivals is difficult, but with the cooperation of a number of filmmakers in the country, Afghan Film managed to hold this festival and considered holding such festivals important to encourage and introduce filmmakers and the artists.

Then, acting Ministry of Information and Culture and a number of officials presented awards and prizes to the winners of the best experimental short films, animations and video clips, as well as the successful filmmakers of the festival.