KABUL (BNA) Although it has been 9 months since at the mid August during evacuation time thousands of Afghans transferred to Kosovo, yet recently an American newspaper wrote that the US is not ready to issue asylum to large numbers of Afghans evacuated.

The US relocated thousands of Afghans from the country to many countries, in mid of late August and early September of last year including Kosovo, which has just separted from the former Yugoslavia, in the name of local partners and vulnerable Afghans.

Not just European countries, Afghans have transfered to South Korea, Albania, Rwanda, the United Arab Emirates, Qatar, most of whom have been waiting for months to be transferred to the US.

After all now an American newspaper has said that many of those who transferred to Kosovo will not be allowed to departure to the US.

“The State Department of US has informed some Afghans who have been housed at a military base in Kosovo that they will not be allowed to enter the United States,” the Wall Street Journal wrote in a recent issue.

Thousands of Afghans were evacuated from Kabul with their families, after the complete withdrawal of US and NATO troops from Afghanistan, and some were transferred as refugees to the Bunde Steel military base in Kosovo.

Although some of these Afghans have US green cards or citizenship and can leave the Bundes Steel base known as small Guantanamo Bay for the United States, many have preferred to stay with family members who do not have such documents. went on saying the Newspaper.

State Department officials have said that the case of some of these people is being investigated, but a large number of these refugees have been informed that their application to enter the United States has been rejected and the reason is that they are not “eligible”

According to newspaper, the wife of one of the senior security officials of the former government is also on the list of those rejected. 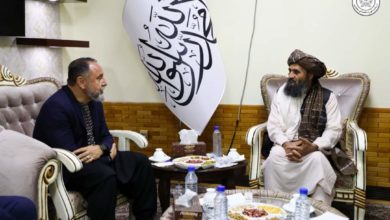